You are here: Home › Prefabricated Homes to the Rescue
Article updated on June 1, 2015 in Factory Built Homes, Manufactured Homes, Modular Homes, Modular Structures, Prefab Homes 0
It's only fair to share...

Today’s world is full of natural disasters. Earthquakes, hurricanes, tsunamis, floods and fires have been devastating whole communities leaving many people homeless. Chile, Haiti, Japan, New Zealand, the U.S. and even Canada and many more have been hit and are struggling to rebuild. All have reached out to the manufactured building industry with a desperate need for temporary and permanent housing. The industry has responded to the challenge. 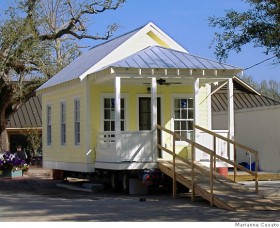 The “Katrina Cottage I” modular home, designed by Marianne Cusato and built by Lowes for Katrina disaster victims.  This is an excellent example of a small, quick to build, and affordable home.

Modular home manufacturers are being called upon to construct and deliver a great number of homes as fast as they can. In some cases, manufacturers have been solicited to open new facilities in the devastated areas and train locals on how to build modular structures in order to speed up the process. Thousands of homes have been trucked across country or shipped from one country to another to aid victims of natural disaster. Makeshift neighborhoods have been erected in ball fields and parking lots while the work of demolishing damaged buildings and reclaiming lands takes place.

Unfortunately, once the afflicted areas are prepared for habitation, traditional rebuilding is often slow and costly. Goods and services are at a premium following a natural disaster. The price of building materials and especially skilled labor skyrocket. Fortunately, the price of a modular house tends to remain relatively stable during these times. They are more affordable than a conventionally built home, even with the added cost of delivery. For some the choice comes down to having a prefabricated home to move into within a week or waiting months or longer for the construction of a stick built house. In communities where floods and earthquakes are prevalent, prefabricated housing is becoming common for an even more important reason than affordability or building speed. 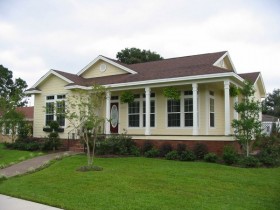 An example of a larger modular home. This is a New Orleans style prefab home built by Drew Developers.

Prefabricated houses are safer than conventionally built homes. They are built stronger and with approximately 30% more material to withstand transport from the factory to the building site and to endure the stress of being lifted by crane. While houses themselves are a common cause of injury from falling debris during earthquakes or hurricanes, the tendency of modular homes to resist extreme weather means less injury for its occupants. Manufactured houses are also constructed with high quality lumber and to the highest level of building code. For example, manufactured houses are required to have smoke detectors and many even have escape windows.

The driving need for manufactured homes in the face of natural disasters is leading companies to concentrate on how technology might improve prefabricated housing. We are now seeing the emergence of “earthquake-proof” houses and homes built from floating materials. The industry is learning with each emergency and moving closer to a time when the prevalence of modular structures will be able to help mitigate some of the effects of natural disasters.

View all posts by Home Manufactured →

The Value of a Prefab Garage

We are an independent resource providing information on manufactured and prefab homes.